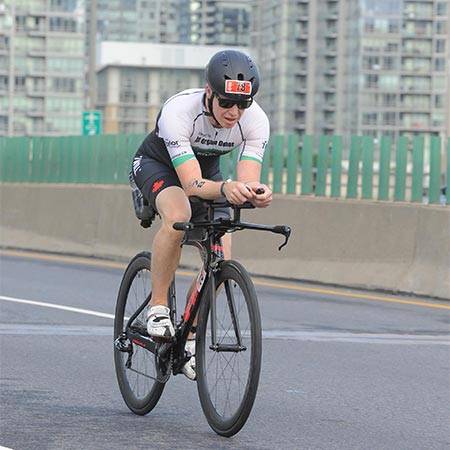 Jeremy Olsen was eager to get back to an active and energetic lifestyle after receiving a new heart in 2015.

But he never imagined he would end up completing an Olympic distance triathlon.

"I was told this wasn't a possibility for me," says Jeremy in a moving video produced by the Toronto Triathlon Festival (TTF). "But it was."

In 2018, Jeremy became the first Canadian heart transplant recipient to complete the Toronto Triathlon, which consists of a 1.5-kilometre swim, 40-km bike ride and 10-km run.

He completed the course again last month, beating his time from a year ago by an impressive 20 minutes.

"I was overwhelmed with relief and gratitude when I crossed the finish line," says Jeremy. "My son was there to cheer me on – I was just filled with happiness."

Born with a complex heart disorder, doctors thought Jeremy wouldn't live past the age of two. Thankfully, he beat the odds, and at seven underwent a full reconstructive heart surgery that allowed him to live a healthy life during his teenage years.

He was soon placed on a waiting list for a heart transplant. He began 2015 in the hospital, watching his son take his first steps over FaceTime with his wife. 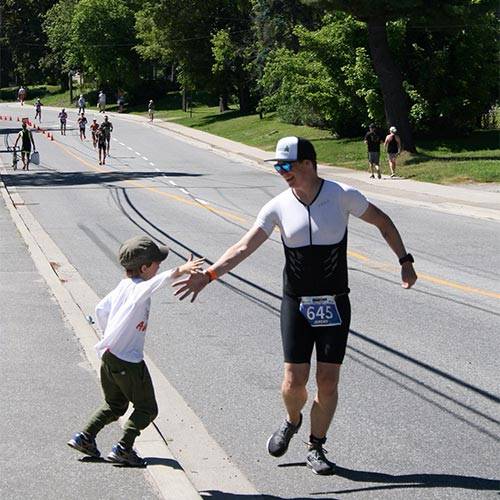 Then, one morning in June of that year, Jeremy was awoken at 6 a.m. by doctors telling him a new heart was waiting for him in the operating room.

From that day forward, Jeremy knew that he wanted to be the healthiest version of himself possible.

Knowing the importance of exercise on the road to recovery, Dr. Heather Ross, Jeremy's cardiologist at the Peter Munk Cardiac Centre (PMCC), recommended he work with Robert Bertelink, Cardiac Rehab Supervisor at the Cardiovascular Prevention and Rehabilitation Program at UHN.*

"Heather said to me, 'Rob will help you get fit,'" Jeremy says. "'I think you guys will have a lot of fun together.'"

Rob and Jeremy worked together to help get Jeremy to a point of exercising on his own on a regular basis. On the one-year anniversary of his transplant, Jeremy ran five kilometres.

"Jeremy came to me as a relatively new heart transplant recipient," says Rob. "Throughout his journey, he's faced a lot of adversity – his perseverance is admirable."

Unfortunately, in 2016 Jeremy was diagnosed Cardiac Allograft Vasculopathy, an accelerated form of coronary artery disease that affects heart transplant patients. It may take up to 10 years to present itself after a transplant, but in Jeremy's case, it was much faster.

'It's pretty incredible the amount of support I've received'

Luckily, Rob came across some hopeful research that suggested 300 minutes a week of high-level cardio may be able to stop or even reverse the effects of the disease. With the help of medication and a strong rehab plan, Jeremy put a stop to its progression.

"No matter how many time Jeremy's knocked down, he always sees it as an opportunity to get back up and become stronger," says Rob.

Jeremy went on to participate in the annual triathlon events at the Canadian Transplant Games – winning two golds, two silvers and two bronzes.

"After the Canadian Transplant Games, I knew I wanted to finish an Olympic distance triathlon," says Jeremy. "I remember asking myself – could I do this for real?"

The answer was yes.

Jeremy expresses his gratitude to Toronto Rehab, PMCC and UHN for the quality of care he's received throughout his journey.

"It's pretty incredible, the amount of support I've received," says Jeremy. "You're a person, not just a number – everyone here truly celebrates your successes."

Jeremy also completed the Ironman 70.3 Muskoka triathlon in July, which consisted of a 1900-metre swim, 90-kilometre bike and 21.1-km run.

He plans on completing the Toronto Triathlon for the third time next year.